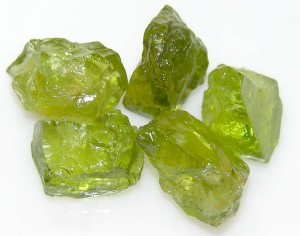 If you were born in August, then your gemstone is the Peridot, which is formed from the mineral olivine and found deep underground, usually close to a volcano. In fact, folk lore in Hawaii says the stone represents the tears of the fire and volcano goddess Hele.

Going further back in history, there is evidence that the Egyptians mined the Peridot on the island, Zabarget in the Red Sea. They were known as the “gems of the sun”. The Romans called them “Evening Emeralds” since they seemed to shimmer in darkness. In fact, these gems only come in green, unlike most other gemstones and which as led to some confusion with the Emerald. The Peridot green may vary from a very pale lime or yellowish green to a dark green. The darker green usually is found in larger stones weighing over 10 carats. The most common shade is a yellowish-green.

Did you know that evidence of Peridot was found in comet dust on a robotic space probe? Its also been found in pallasite meteorites – which makes it really, really old!

Arizona supplies us with the Peridot, as well as Myanmar (Burma), Sri Lanka, China, Pakistan and Kenya. The Peridot is not as hard a stone as the emerald, ruby or diamond. It is cut into many styles and shapes and used in all kinds of jewelry. To clean, it’s best to use mild, soapy water.

We have a lovely selection of jewelry featuring the Peridot…check them out here!